Hear at Home is participating in Earth Hour

Hear at Home is participating in Earth Hour and we encourage you to do the same! Earth Hour 2010 takes place on Saturday 27 March at 8.30pm (local time) and is a global call to action to every individual, every business and every community throughout the world. It is a call to stand up, to take responsibility, to get involved and lead the way towards a sustainable future. Iconic buildings and landmarks from Europe to Asia to the Americas will stand in darkness. People across the world from all walks of life will turn off their lights and join together in celebration and contemplation of the one thing we all have in common – our planet. Let’s make 2010 the biggest Earth Hour yet!.
Posted by Hear at Home Mobile Hearing Clinic LTD at 11:29 AM No comments:

Sound travels through the air as vibrations in air pressure. To hear sound, your ear has to do 3 basic things:

1. Direct the sound waves into the hearing part of the ear
2. Sense the fluctuations in air pressure
3. Translate these fluctuations into an electrical signal that your brain can understand

The outer part of your ear, serves to "catch" the sound waves. Your outer ear is pointed forward and it has a number of curves. This structure helps you determine the direction of a sound. If a sound is coming from behind you or above you, it will bounce off the ear in a different way than if it is coming from in front of you or below you. This sound reflection alters the pattern of the sound wave. Your brain recognizes distinctive patterns and determines whether the sound is in front of you, behind you, above you or below you.

Since your ears face forward, you can hear sounds in front of you better than you can hear sounds behind you. Many mammals, such as dogs, have large, movable ears that let them focus on sounds from a particular direction. Human ears are not so adept at focusing on sound. They lay fairly flat against the head and don't have the necessary muscles for significant movement. But you can easily supplement your natural ears by cupping your hands behind your ears. By doing this, you create a larger surface area that can capture sound waves better.
Posted by Hear at Home Mobile Hearing Clinic LTD at 10:03 AM No comments:

There are a few different types of hearing loss: conductive, sensory, mixed (conductive and sensory combined), and neural.

Conductive hearing loss. This happens when there is a problem with a part of the outer or middle ear. In most cases medical treatment can help.

Sensory hearing loss. This happens when the cochlea is not working correctly because the tiny hair cells are damaged or destroyed. Depending on the loss, a person may be able to hear most sounds (although they would be muffled); may be able to hear in quiet but not in noise; only some sounds; or no sounds at all. Sensory hearing impairment is almost always permanent.

How do we hear?

When something makes a noise, it sends vibrations, or sound waves, through the air.

The human eardrum is a stretched membrane, like the skin of a drum. When the sound waves hit your eardrum, it vibrates and the brain interprets these vibrations as sound.

Actually, as most things having to do with the human body, it is a little more complicated than that.

After the vibrations hit your eardrum, a chain reaction is set off. Your eardrum, which is smaller and thinner than the nail on your pinky finger, sends the vibrations to the three smallest bones in your body. First the hammer, then the anvil, and finally, the stirrup. The stirrup passes those vibrations along a coiled tube in the inner ear called the cochlea.

Inside the cochlea there are thousands of hair like nerve endings, cilia. When the Cochlea vibrates, the cilia move. Your brain is sent these messages (translated from vibrations by the cilia) through the auditory nerve.

Your brain then translates all that and tells you what you are hearing.

- Your ears aren't just good for helping you hear. They help you keep your balance as well. Near the top of the cochlea are three loops called the semi-circular canals. These canals are full of fluid that moves when you move your head. It pushes up against the cilia and sends messages to your brain that tells it how your body is moving.

You know that feeling of dizziness after you have been spinning around? Well, the fluid in you ears spun as well. That makes the cilia move in all different directions and confused your brain.

- Children have more sensitive ears than adults. They can hear a larger variety of sounds.

- Dolphins have the best sense of hearing amongst all the animals. They are able to hear 14 times better than humans.

-Too much fluid putting pressure on your eardrums causes earaches. They are often a result of infection, allergies, or a virus.
Posted by Hear at Home Mobile Hearing Clinic LTD at 11:41 AM No comments:

One of the most amazing and important events of infancy and early childhood is the development of language. Babies start to say their first words around one year of age and by preschool age they usually know more than 1500 words and begin telling stories. The language skills developed during the preschool years serve as a wonderful foundation for learning in school.

When a baby is born with a hearing loss, this process of developing language can be delayed. Early screening helps reduce the delay in language development a child with hearing loss may experience, by ensuring the child and their family receives the support and professional care they need.

Your child is never too young to have a hearing check. The BC Early Hearing Program provides simple and safe screening tests to check hearing after birth. Newborn hearing tests are important for families, because much can be done if hearing loss is caught early in a baby’s life.

About 1 of every 300 babies in BC is born with hearing loss. This number rises to 1 in 50 for babies born in Special Care Nurseries. There are no obvious signs to tell us which infant has hearing loss, and without early screening, many babies with hearing loss go undetected until they are young children or school age.

Over half of all infants diagnosed with hearing loss are healthy and have no hearing loss in the family or other risk factors for hearing loss.
Posted by Hear at Home Mobile Hearing Clinic LTD at 10:01 AM No comments:

Hear the World is a global initiative by Phonak to raise awareness about the importance of hearing and the consequences of hearing loss – a problem that affects more than 16% of the world’s population. The initiative addresses the social and psychological effects of hearing loss, and provides information on prevention and solutions. Our ability to hear is a fundamental part of our lives, and yet most people take it for granted.

Hear the World raises awareness about the importance of hearing, educates the public about the consequences of hearing loss and informs about how people can benefit from the solutions that are available.
The initiative focuses on three key areas: prevention, support, and solutions.

Prevention is key and research encouragingly proves that hearing loss is the world’s most preventable impairment. We live in an extremely noisy world, with sound levels that threaten our hearing over long periods of time. Even seemingly harmless things like children’s toys and garden tools can cause significant damage.
Hear the World educates the public about these risks and teaches them how to avoid them – such as reducing volume levels or wearing hearing protection where appropriate.

Support for those affected is a major step on the path to obtain a solution. Despite all the drawbacks of not being able to hear well, the average person with hearing loss waits 10 years before taking action. Not only does this reduce their quality of life, it can also result in their brain losing capacity to recognize everyday sounds, along with psychological difficulties associated with isolation.
Hear the World calls for a dialog to lead people who are affected, and the world they live in, out of isolation, and to point them toward possible solutions.

Solutions for people affected by hearing loss come in the form of high-tech hearing devices that incorporate virtually invisible, intelligent mini-computers. These are tiny in size yet enormous in impact. Overwhelming evidence shows that the use of a hearing aid brings major improvement to the quality of life of its users. These individuals enjoy overall health better than non-users with hearing loss, gain self-confidence, play a more active role in family, social and business activities and even have greater earning power.
Posted by Hear at Home Mobile Hearing Clinic LTD at 7:30 AM No comments: 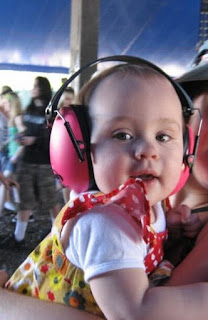 In the first years of life, a child's hearing is particularly sensitive to loud noise, be it intermittently or frequently. And since hearing damage is permanent, it's necessary to take every possible precaution to ensure that your child's hearing is protected when in noisy environments.

When attending sporting events, car races, concerts or any other loud environment be sure your child wears ear protection.
Posted by Hear at Home Mobile Hearing Clinic LTD at 12:36 PM No comments:

A few years ago, the hearing aid battery industry standardized battery sizes and came up with a color code to help you remember your battery size.

On the back of each battery is a tab that you pull off to "activate" the battery. Each color corresponds to a different size. Now the numbers and colors for each size are all standard. Sometimes you may see other letters after the numbers, but those are arbitrary letters. The most important thing to remember is size and color as noted in the table below.